Senate committees have been considering the nomination of Neil Gorsuch to the Supreme Court (SCOTUS) and the full Senate is scheduled to vote a week from Friday. Gorsuch was nominated to replace Antonin Scalia, who dies last year. As usual, the nomination has created a partisan battle. 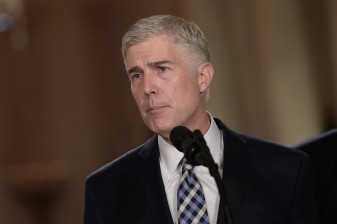 Gorsuch was approved by the Senate overwhelmingly some years ago, when he was nominated for the 10th Circuit Court of Appeals. But this time is different and Senate Minority Leader Charles Schumer (D-NY) has vowed to block him and to filibuster the nomination. Of course, Repbulicans are outraged at the partisanship for a judge that is widely recognized as a strong legal thinker and jurist. But the fact that they refused even to vote on President Obama’s nominee to the Supreme Court last year set the stage for payback from Democrats. Where does it end–when does one party decide to quit playing games?  In this atmosphere, who knows?   But at the end of the day, it seems that Gorsuch will be confirmed and take his place on the Supreme Court by summer.

Geeky aside and background on a filibuster:

Unique Senate rules allow debate on anything to go on pretty much indefinitely unless someone asks to ‘invoke cloture’, which means invoke a closing to the debate and to hold an actual vote. Although it takes only a majority of Senators to pass anything, it takes 60 of the 100 members to end debate. So a Senator or group of Senators could just talk endlessly and unless 60 of their colleagues vote to end debate, it could go on forever or until everyone gives up.